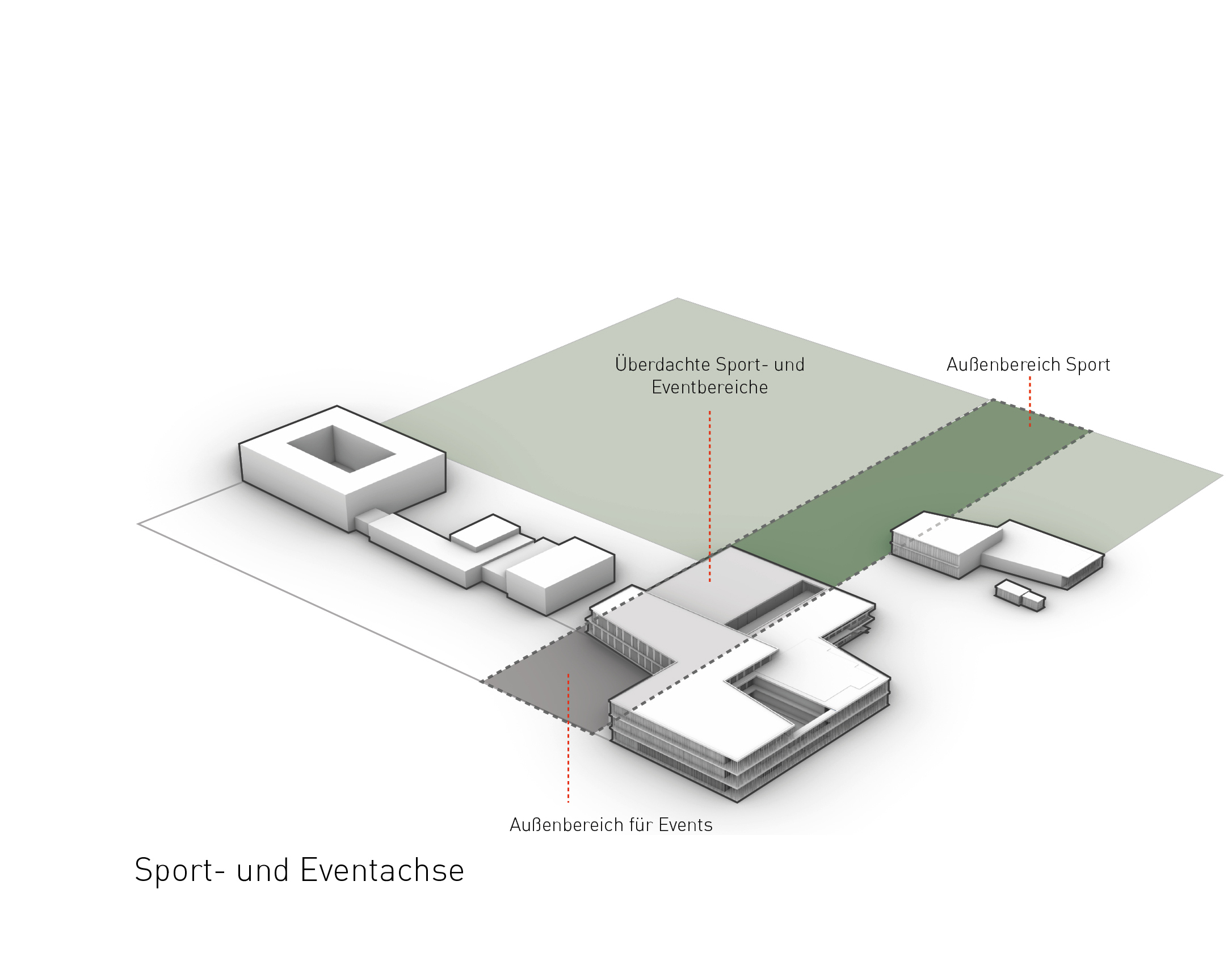 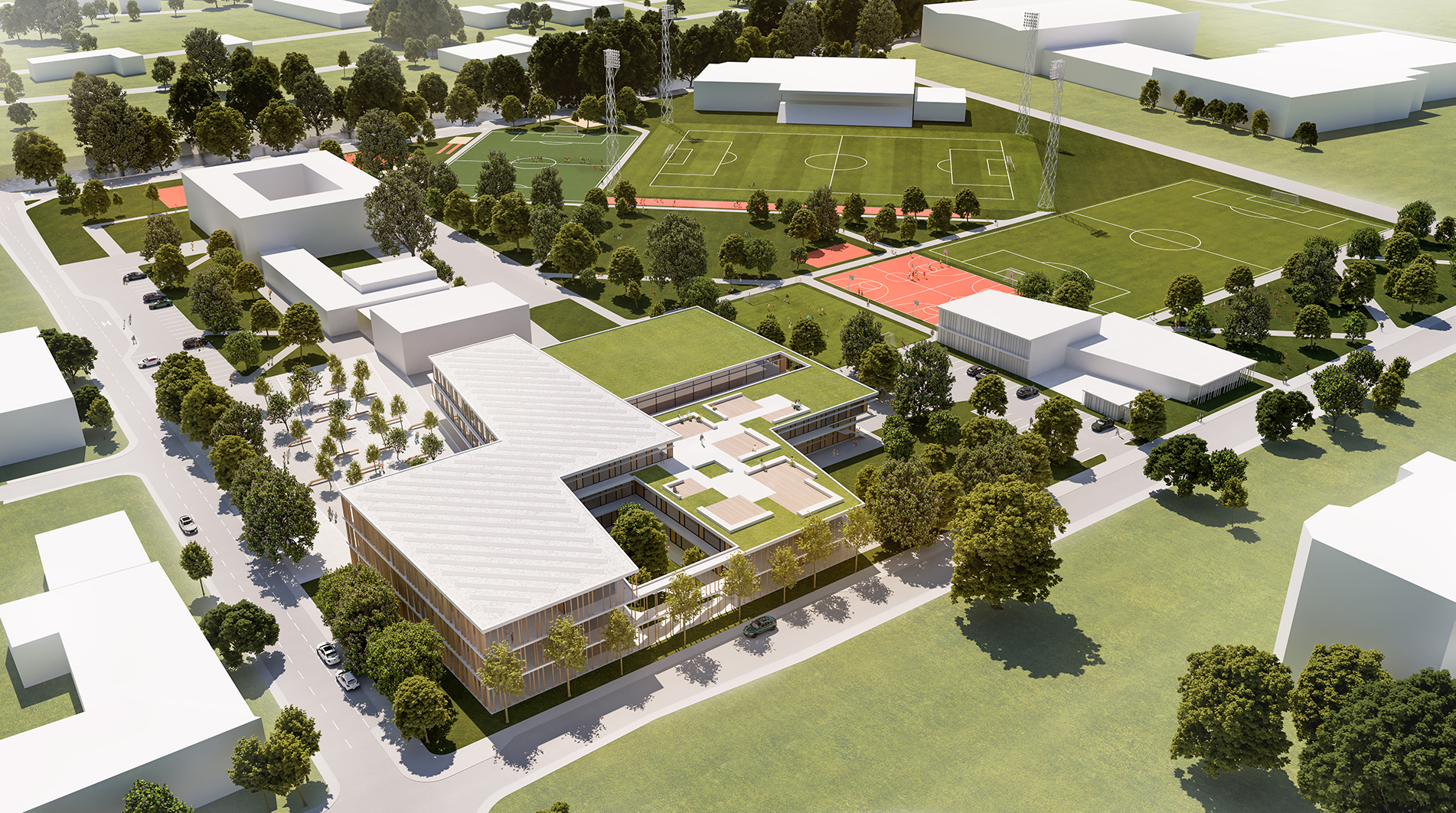 In the future the Schulgasse (which translates literally as “School Lane”) in Oberwart will be clearly defined by two educational focuses: the Bundesschulcampus (Federal School Campus) will remain at its central position, while the existing schools adjoining the sports facilities will be augmented by a new primary school and a kindergarten to create a new centre for educational and child-care facilities, a Gemeindeschulcampus (Community School Campus). The present project not only takes up the sensible spatial concentration of the community schools but also derives its urban layout from an awareness of being part of a whole in two regards:
On the one hand a clear endpoint is to be made at the corner of Schulgasse/Sportlände, while on the other the school forecourt will be planned together with the forecourt of the European Middle School with the aim of creating a public space that is effective in urban design terms and becomes a place of identification for the entire community school campus.

Consequently, the school building will be accessed from this new, central school square. The interior is reached from a generously covered front area. The gym halls can, if required, open towards this covered zone and therefore offer exceptional potential for events with a connection to outdoor space (for instance summer festivals, Christmas markets etc.). At the centre of the building is the school hall, a three-storey, three-dimensional node that connects all the functions and areas

of the school and forms its heart. On either side of this hall seating steps flanked by staircases lead up to the next floor and create a kind of amphitheatre with a central area for performances. The seating steps can also be used as an auditorium for the nearby European Middle School or, conversely, as a stage for performances. The planted schoolyard can be reached directly from the school hall. 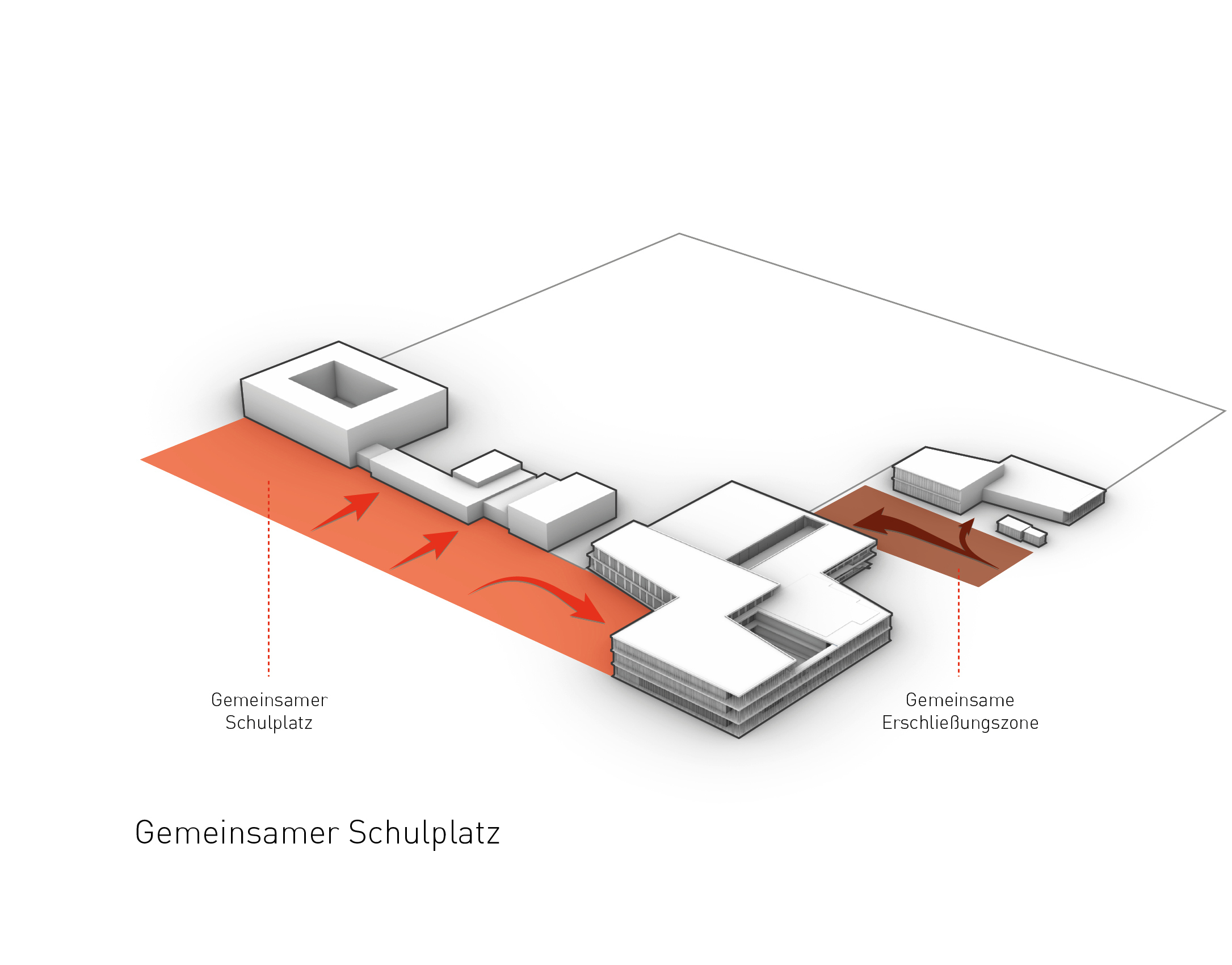 The school hall is the open space for the life and activities generated by those programs that accompany the lessons, which include day care as well as events. The recreation spaces are directly integrated in the hall area – although they can be separated if required – and together with the seating steps form a generous zone that can accommodate activities of quite different kinds. The library, an important part of the overall educational concept, is also integrated here, which encourages a playful approach to reading.

LIGHT – AIR – SUN – SPORT … and greenery in front of the windows … a new identity for Oberwart school campus! 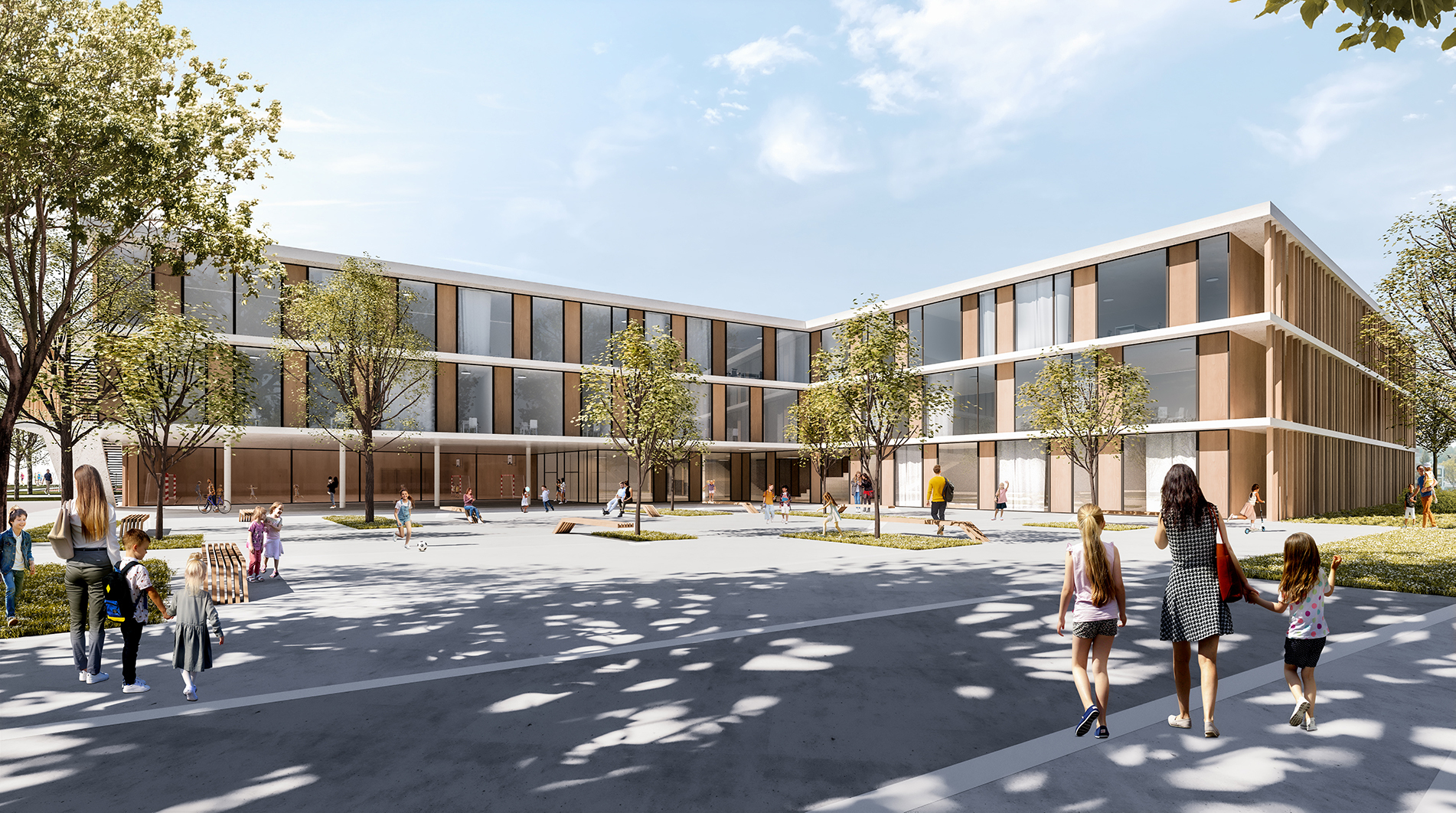 Three “wings“ are docked to the school hall: two of these wings contain three clusters each, the sixth of which is initially made as an “open air school” to which a floor can be added later. The third wing is reserved for the music school, which can also be reached directly and separately from the draught lobby via its own staircase. Only the percussion practice room, which can be reached via a short route from the foyer, is located on the ground floor, as was required by the brief.
As they serve all the pupils, the facilities of the day school are, as an extension of the hall, placed so that they extend “through“ the building. They have extensive open areas from which the outdoor sports facilities can be reached. 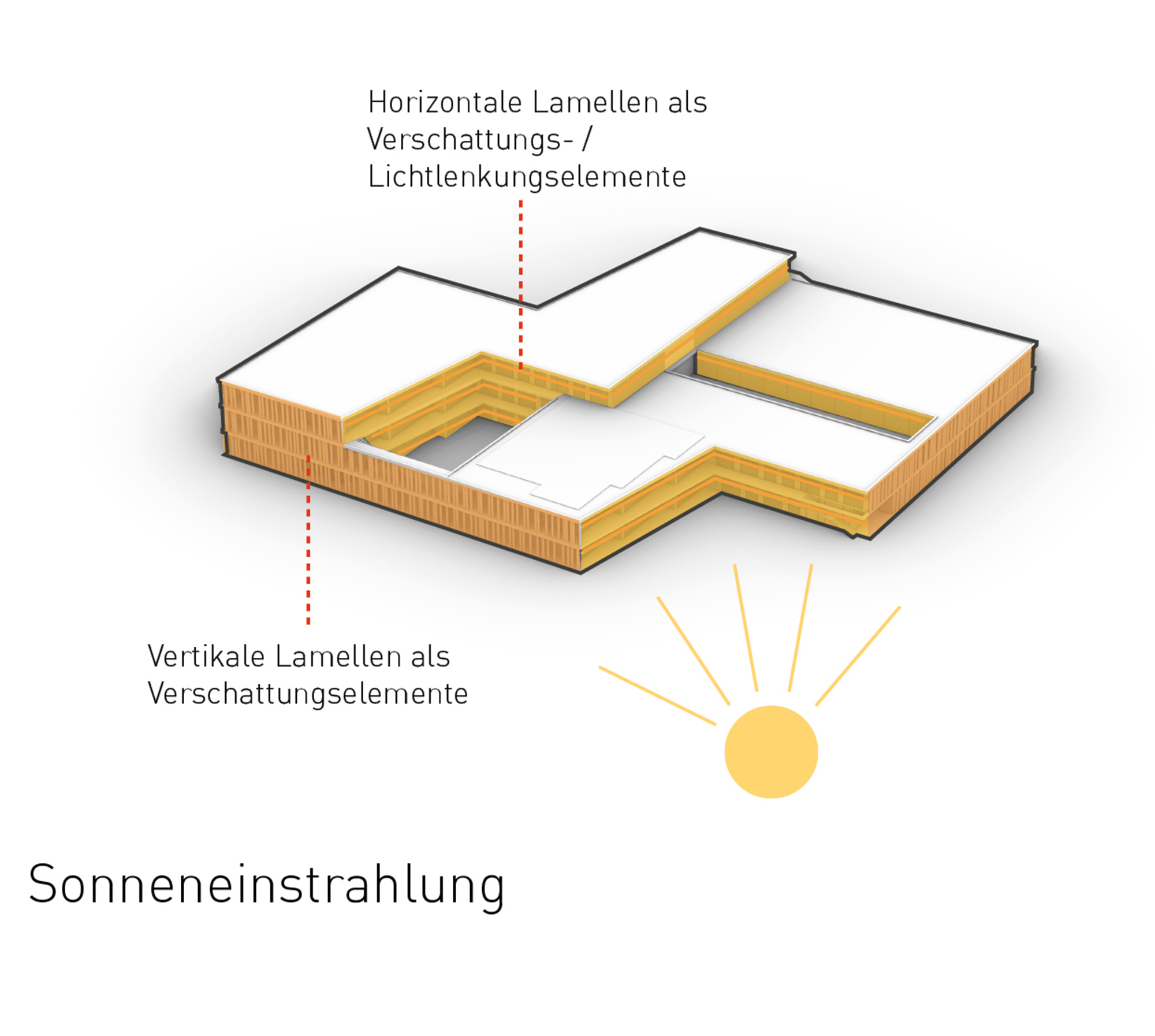 The gym halls and exercise room form a connection between the school and the existing outdoor sports areas. This means that from the locker rooms, you can go outside or into the gyms. The carpark, deliberately out of sight from Schulgasse, is also located here and is entered from Sportlände; it serves both external users of the gym hall and the teachers. The deliveries area is also positioned here, which is both practical and discreet. 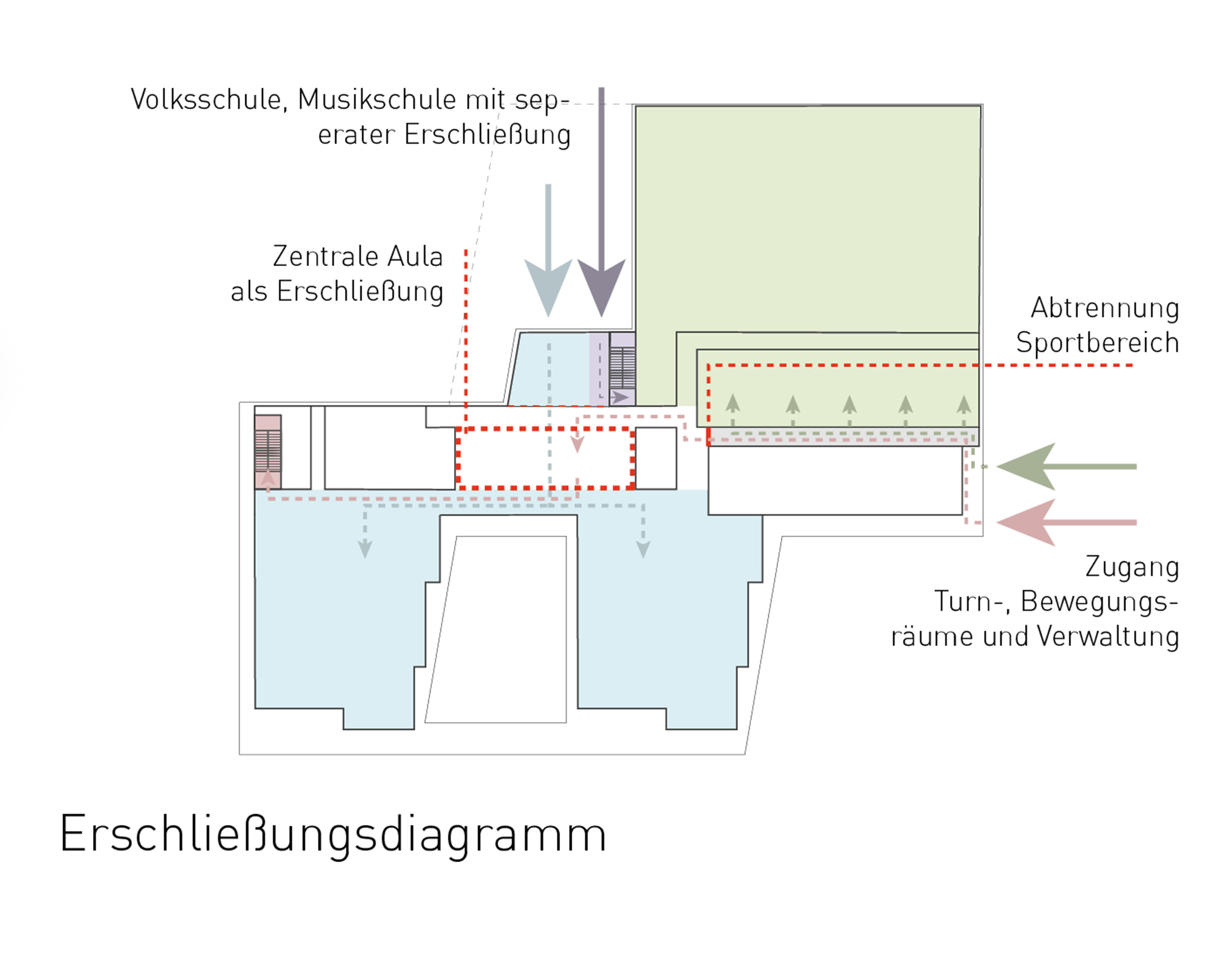 The new kindergarten building to be added later will also be accessible from the carpark on Sportlände with an adequate forecourt. The outdoor spaces for the children’s groups will extend towards the southeast.
The school building is rationally planned, not just in terms of organization but also as regards the construction method used. The main loadbearing elements follow the grid of the classrooms on all levels, creating an efficient layout of columns, walls, and floor and ceiling slabs. It is planned to use a solid construction system that will provide the storage mass needed, while wood will be used for the secondary building elements and for the surfaces to produce tactile and harmonious spatial qualities.

The facades at the outer corners of the building that mark the urban block have deep timber slats. These function as sun protection or are used as a kind of trellis for climbing plants that will produce a good micro-climate. The continuous balconies of the clusters, with the latter forming projecting sun protection canopies for the former, as well as the escape staircases are integrated in this structure of slats. The facades of the recessed corners of the block are given a smooth finish. Towards the south the balcony slabs

referred to above as well as an additional horizontal slat that directs light and provides shade are used as sun protection. Additionally, at ground floor level all the trees have been preserved and additional trees are envisaged that will provide shade while allowing sufficient light to enter the teaching spaces in winter. The proposals follow the calculated logic evidenced by the interplay between the competition organiser’s economic and ecological specifications. 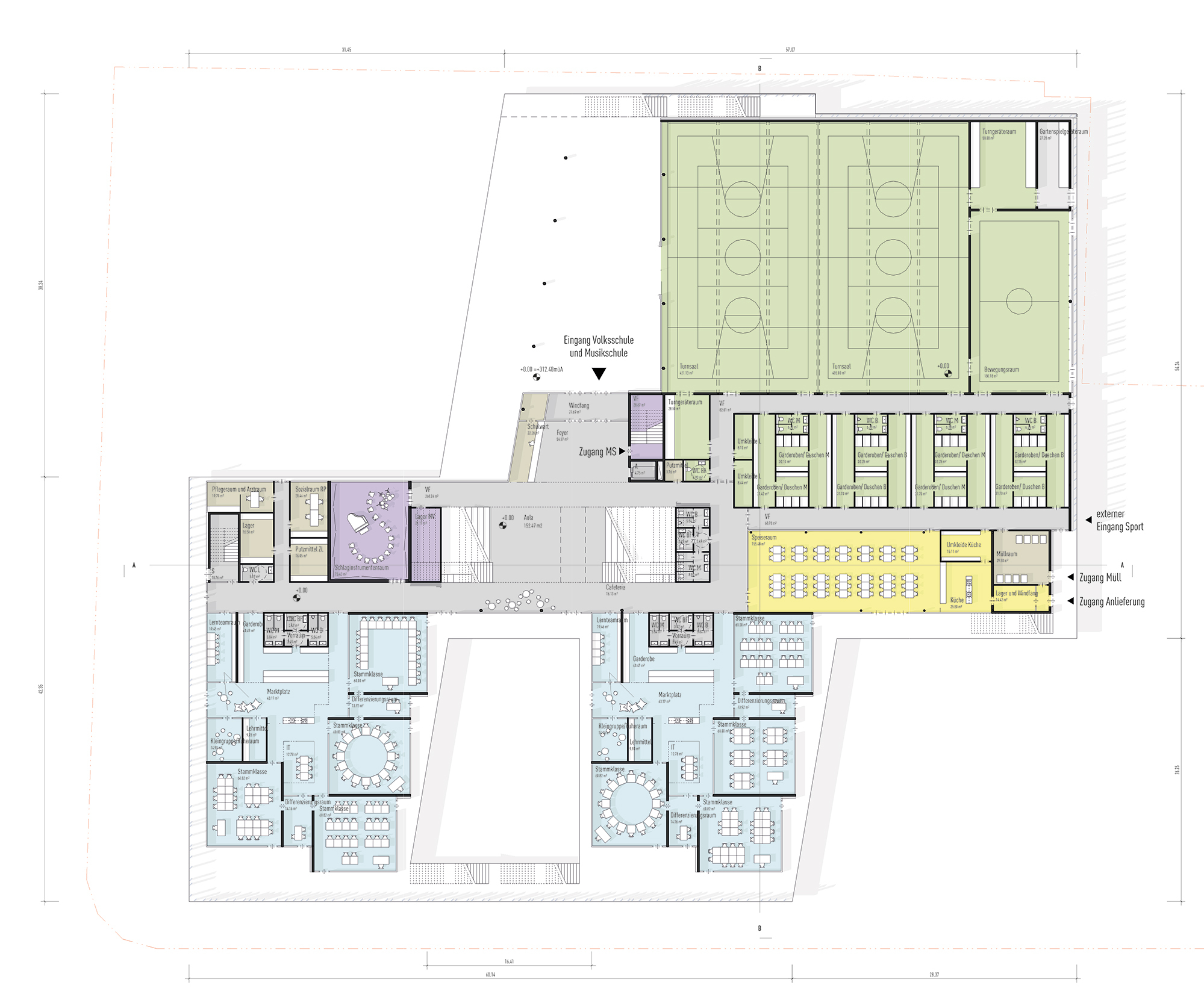 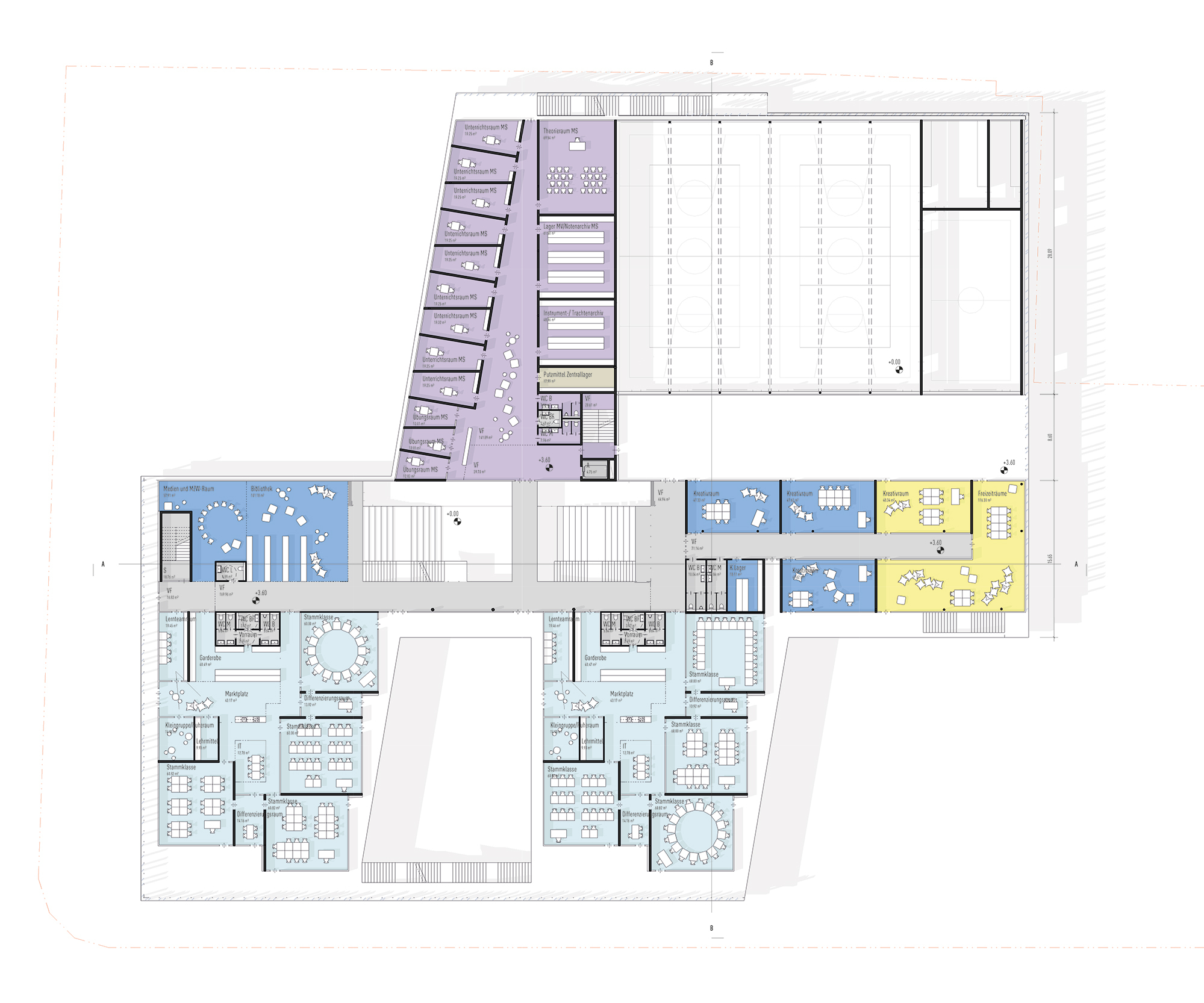